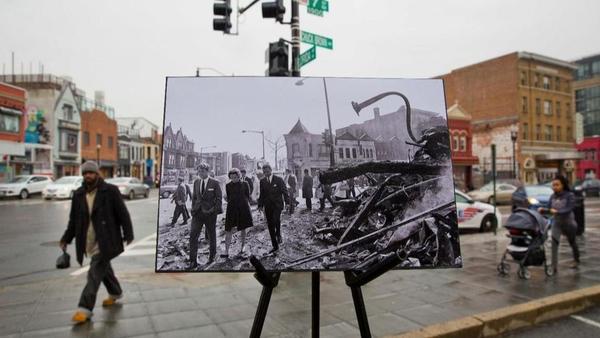 A photo of Sen. Robert F. Kennedy touring riot-stricken Washington after the assassination of Martin Luther King, Jr. stands on a easel in the same area today. King was murdered 50 years ago Wednesday. Many African-Americans say his dream of equality remains unfulfilled. (AP Photo/Pablo Martinez Monsivais)

Marchers in Bethlehem on Wednesday will mark the 50th anniversary of the assassination of the Rev. Dr. Martin Luther King, Jr., the civil rights hero cut down by a sniper as he stood on the balcony of a hotel in Memphis, Tenn.

King’s death at the hands of white supremacist James Earl Ray, coming just four years after the passage of the Civil Rights Act that promised the social equality so long denied to African-Americans, was one of the signal tragedies of the calamitous 1960s.

Today, much of King’s dream remains unfulfilled, said Esther Lee, the Bethlehem NAACP leader who has devoted her life to the civil rights.

After a half-century, “we haven’t traveled that far,” she said. “I had hoped things would be a lot different. Life is turning around, but I don’t know what year it will come to fulfillment.”

Lee’s sentiment is widely shared among African-Americans. Only 1 in 10 think the United States has achieved all or most of the goals of the civil rights movement King led, according to a new poll by the Associated Press-NORC Center for Public Affairs Research.

Three-quarters of African-Americans said there has been little or no progress on fair treatment by police, and more than half answered the same about fair coverage by the media, political representation or equal economic opportunities.

“I think that when we reflect on the 50 years since Dr. King was assassinated, we still find ourselves in the U.S. really dealing with what I call tribal divisions,” said the Rev. Larry Pickens, ecumenical director of the Lehigh Conference of Churches.
“One of the elements of what Dr. King thought is that we would come together as a nation,” said Pickens, who organized a bus trip to Washington, D.C. for Wednesday’s anniversary rally on the National Mall.

“There have been advances but when you look at the economy, for example, and some of the disparities that exist, those are some realities we have not seen actualized,” he said.

The public is invited to join the Bethlehem march. Participants will assemble at 4:45 p.m. at Payrow Plaza and begin walking at 5 p.m., crossing Fahy Bridge and proceeding to Rev. Dr. Martin Luther King, Jr. Park on Carlton Avenue in south Bethlehem. The marchers will use the bridge sidewalk so it won’t be closed.

A program will commence at 6 p.m. Lee said she and five other speakers will address some of the major concerns for the African-American community today, from wages to education to prison reform.

The march is co-sponsored by the NAACP, the YWCA Bethlehem, Bethlehem Area Public Library and LEPOCO Peace Center.

The Washington event, which begins at 7 a.m. with a silent prayer walk and ends at 3 p.m., is called “ACT NOW: Unite to End Racism.”

Pickens said he expects the rally to unfold along the lines of the recent gun control rally, the Women’s March and other events that he believes are healthy signs of a vibrant democracy.
“Those are elements of a larger movement in this country,” he said. “Racism is one of the issues, but it seems larger than that to me.”

The Associated Press contributed to this story.
daniel.sheehan@mcall.com
610-820-6598